The FDA has released statistics regarding the number of medical devices that have been recalled every year from 2003 through 2012. The numbers are very shocking, especially because there was a 97% increase in the number of recalled medical devices from 2003 to 2012.  To the casual observer, it would seem that the FDA needs stricter testing before approving a medical device for use in patients. Many doctors, lawyers, and patient advocates have come to the same conclusion. 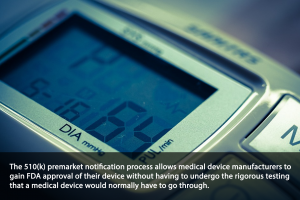 A large part of the problem with regard to the number of defective medical devices in the U.S. is the FDA’s controversial 510(k) process. The 510(k) premarket notification process allows medical device manufacturers to gain FDA approval of their device without having to undergo the rigorous testing that a medical device would normally have to go through. Approval through the 510(k) process is achieved when the FDA finds the new medical device to be “substantially equivalent” to a device that has already been approved by the FDA. 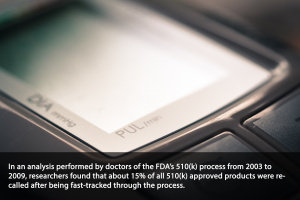 In an analysis performed by doctors of the FDA’s 510(k) process from 2003 to 2009, researchers found that about 15% of all 510(k) approved products were recalled after being fast-tracked through the process. Though this number may seem small, one must consider the fact that each recalled medical device may have been used on more than one patient. For example, if each one of the more than 3,000 recalled medical devices made it into 100 patients, then there could be more than 300,000 affected patients.

Fast-track approval for medical devices causes billions of dollars’ worth of injuries every year. Attorney Derek Merman at the Merman Law Firm has experience fighting the profit-seeking medical device manufacturers to get his clients the compensation they deserve for their injuries, and he will do the same for you. If you or a loved one have been injured due to a defective medical device, contact the Merman Law Firm today for immediate assistance.