Risperdal is an antipsychotic drug manufactured by Janssen Pharmaceuticals, a subsidiary of Johnson & Johnson. First approved by the FDA in 2002, Risperdal was originally used for the treatment of schizophrenia. In 2003, the FDA revisited Risperdal and ultimately decided to approve it for the short term treatment of acute and mixed episodes of bipolar disorder as well. 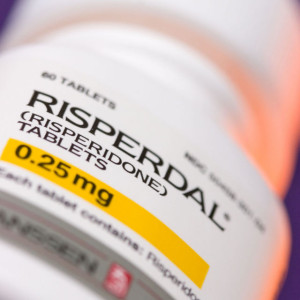 Risperdal, once a big seller for Johnson & Johnson with peak sales at $4.5B, has been the subject of thousands of lawsuits in recent years due to the drug’s dangerous side effects. Though normal side effects of Risperdal are relatively minor and can include insomnia and dizziness, one side effect is certainly not minor—gynecomastia.

Gynecomastia is a condition that causes a male patient’s breast tissues to swell, making their breasts look like female breasts. In some cases, the condition goes away in time; unfortunately, others may require surgery to correct. The majority of the current lawsuits filed against Johnson & Johnson are filed on behalf of plaintiffs who took Risperdal in their younger years and later developed gynecomastia.

In addition to the private lawsuits Johnson & Johnson has been facing in recent years, the U.S. Department of Justice also filed criminal and civil lawsuits against the company. In its lawsuits, the DOJ alleged that Johnson & Johnson promoted Risperdal for off-label uses, which is illegal. Ultimately, the lawsuits were settled by Johnson & Johnson in 2013 for $1.67B.

The thousands of private lawsuits against Johnson & Johnson are still ongoing, however, and the plaintiffs are alleging that Johnson failed to warn them of the possibility that taking Risperdal could lead to gynecomastia. There was no warning on Risperdal’s label about the possibility of gynecomastia until 2006, and most of the plaintiffs suing Johnson took the drug before the warning was put on the label.

There have been 3 Risperdal trials so far, with juries awarding the plaintiffs $2.5 million, $1.75 million, and $500,000 in damages. Attorneys for the plaintiffs are expecting more trials to be heard in 2016, and it is unclear at this point whether or not Johnson plans on settling the remaining lawsuits against the company.